How CBD is Providing Hope for Asthma Patients With growing prevalence and inadequate treatment, the need is great for novel therapy in asthma. Although research is still limited, a 2015 study by universities in Brazil is suggesting cannabidiol (CBD) as a potential new asthma treatment. Supporting this study is the emergence of a new study conducted by the world’s leading cannabis researchers that will test CBD’s potential ability to decrease inflammation, clear airways, and prevent asthmatic symptoms from triggering at all. These therapeutic benefits could provide patients with the hope for a better life.

An Overview of Asthma

According to the American College of Allergy, Asthma, and Immunology, an estimated 26 million people in America suffer from asthma, including seven million children. This makes asthma the leading chronic disease in children. Consequently, asthma causes a staggering average of 13.8 million school absences per year. For adults, the annual economic loss in work productivity is estimated at $81.9 billion.

Asthma is a chronic inflammatory disease in the lungs, characterized by restricted breathing. The most common symptoms include coughing, wheezing, shortness of breath, chest tightness, and difficulty breathing. Depending on the frequency of these symptoms and how severely they degrade quality of life, patients can also experience depression.

Symptoms can be triggered by allergens and non-allergens. Allergic triggers can include outdoor allergens such as pollen, grass, and trees, or indoor allergens like dust and pet dander. Non-allergic triggers consist of weather, exercise, illness, stress, physical displays of emotion that affect normal breathing (e.g. shouting, screaming, laughing), and environmental irritants such as smoke, pollutants, and chemicals.

Other triggers include illnesses which affect the respiratory system like the common cold, drugs and over-the-counter medications such as aspirin and ibuprofen, or food additives like preservatives (however, food triggers are rare).

Asthma is often confused as an allergy since the symptoms are only seen when triggered. However, asthma is a chronic disease and is always present even when a patient is not experiencing symptoms. Thus, allergens may trigger symptoms but are not the cause of asthma.

Unfortunately, there is no known cause of asthma. Genetic abnormalities are considered the most likely culprit.

Anyone can develop asthma, yet some people are more susceptible and may experience more severe symptoms. For example, the disease is more common in children than adults, yet adults are four times more likely to die from it. In addition, boys are more likely to get asthma than girls, but women are more likely than men.

Puerto Ricans and African-Americans are at the highest risk of developing the disease, being hospitalized, and dying from it, often due to poor environmental conditions. Around 3,300 Americans die from asthma each year.

Before diving into how CBD may treat asthma, it is important to know how asthma works and is currently treated.

Asthma is characterized by inflammation in the bronchial tubes, causing difficulty breathing. Inflammation is caused by the presence of immune cells called T-helper cells (Th1 and Th2). These cells produce proinflammatory proteins called cytokines and cytokines are produced when the lungs experience a trigger.

This immune response is abnormal. For healthy individuals, allergens cause no problem. However, when an allergen or other substance enters the lungs of an asthma patient, the immune system perceives the substance as foreign and triggers its inflammatory response.

Another characteristic of asthma is hyperreactivity of the airways. In patients with asthma, their airways contract too much and too easily when a trigger is introduced. This action causes wheezing, chest tightness, and other asthmatic symptoms.

Asthma patients also have excess mucus secreted in their lungs, worsening symptoms. Excess mucus is associated with the rising levels of IL-13, a cytokine protein. As this cytokine rises in the lungs, excess mucus is secreted, adding further obstruction to the airways.

No cure is currently available for asthma.

If undiagnosed and not appropriately treated, the disease can lead to death; however, death is often easily avoidable. Several medications exist to manage symptoms. Patients will often have two medications on hand, one for long-term management and another for fast relief of symptoms.

The quick-acting medications are bronchodilators which open up the airways and help remove mucus. Long-term medications are often corticosteroids, such as Symbicort, Flovent, and Advair.

Steroids are powerful drugs and can be dangerous if misused.

If used too long, these medications may cause significant side effects such as infections in the mouth, a weakened immune system increasing the risk of infections, a rise in blood sugar which may lead to diabetes, and stunted growth in children.

Additionally, many patients cannot control or can only partially control their asthma with medication. Especially in cases of severe asthma, patients find little to no relief with medication.

This fact and the potential dangers of prolonged use of medication have created the need to explore and develop novel therapies to more effectively treat asthma.

Fortunately, CBD has positive research behind it that demonstrates it may be a safe and effective way to manage asthma and prevent attacks.

The following studies illustrate the effects of CBD and the endocannabinoid system (the bodily system CBD interacts with) on asthma:

Evaluation of CBD for Asthmatic Inflammation

The researchers measured the levels of several cytokines to test CBD’s effectiveness.

CBD was found to inhibit the production of all but one cytokine, resulting in significantly decreased inflammation. The cytokines CBD suppressed in the study are also found in human asthma, which encouraged researchers that CBD’s anti-inflammatory effect will translate to humans.

The study also noted that past research has shown CBD is well tolerated by humans even when administered chronically, indicating CBD is a potentially safer treatment than medication.

Review of Cannabinoids for Inflammation and Inflammatory Pain

A 2012 study conducted by the University of Florence in Italy explored the role of the endocannabinoid system in asthma.

The research found the activation of cannabinoid receptors on the nerve endings of bronchi acted like a bronchodilator, which opens the airways and allows for unrestricted breathing. It was also concluded that preventing the breakdown of endocannabinoids can reduce pain caused by inflammation.

Since CBD helps activate these receptors, CBD has the potential to be a bronchodilator and an effective analgesic.

Another study by the University of Florence on guinea pigs aimed to evaluate the role of cannabinoid receptors (CB1 and CB2) in preventing asthmatic symptoms.

The study concluded that both receptors were involved in protecting the lungs and targeting them could be a potential preventative therapy for asthma patients.

As a result of the limited yet promising research above, CIITECH (a biotech company based in the UK and Israel) has funded professors from the Multidisciplinary Center on Cannabinoid Research of the Hebrew University of Jerusalem to conduct their own study.

Asthma expert Dr. Francesca Levi-Schaffer and cannabis researcher Dr. Raphael Mechoulam will be working together to study CBD’s potential as a therapy for symptoms of asthma.

The study will test how CBD affects asthma in humans for the first time. The preliminary results of the research should be coming out in the near future.

Results from this study have the potential to provide significantly more scientific and societal legitimacy to CBD, especially since the study’s announcement received considerable media attention. CIITECH is confident the results will be convincing, entitling an article on their website, “We’re going to prove cannabis can treat asthma.”

Clifton Flack, founder of CIITECH, said he wants to create CBD food supplements based on the research. Creating food supplements instead of medication will save the company time and millions of dollars in regulatory approvals while also providing a product that is widely accessible to consumers.

Professor Levi-Schaffer said an inhaled type of CBD medication could be produced as well.

When choosing a specific CBD product, it is important to go with a reputable brand. Check out our Receptra Naturals review for our take on a trustworthy premium CBD brand.

CBD as an Anti-inflammatory

According to the Brazilian study, CBD has the potential to reduce inflammation in asthma patients. T-helper cells find their way to the respiratory system and produce cytokines when responding to an asthmatic trigger, such as an allergen. In turn, cytokines produce inflammation which results in shortness of breath and difficulty breathing.

CBD is an anti-inflammatory as it suppresses the responses of T-helper cells. As a result, cytokines are drastically reduced and inflammation subsides, allowing patients to breathe easier. CBD may also reduce the pain associated with inflammation by activating endocannabinoid receptors.

Tumor necrosis factor (TNF) also plays a role in inflammation and adds to the severity of asthma. TNF is another type of cytokine that causes inflammation and influences other cells to do so as well. CBD was found to specifically lower TNF levels and reduce overall inflammation.

Mucus adds to the severity of asthma symptoms and contributes to the obstruction of airways. The introduction of cytokines causes the excess mucus. The cytokine protein IL-13 is widely considered to be the cause of the occurrence.

Fortunately, CBD has been shown to specifically reduce IL-13 levels in the lungs. This effect allows patients to more easily expel mucus from their body via coughing and prevents excess production.

The airways in asthma patients tend to be hyperreactive and contract too easily. This often leads to obstructed airways. A study by the Institute for Clinical Pharmacology in Germany showed that an endocannabinoid neurotransmitter called anandamide could restrain this obstruction.

CBD as a Preventative

Prevention is the best medicine, and studies show CBD has the potential to protect the lungs from asthmatic symptoms.

Cannabinoid receptors play the largest role in prevention. As the studies above concluded, activating these receptors has the potential to protect the lungs from becoming inflamed even when a trigger occurs. This would prevent patients from experiencing symptoms, allowing them to enjoy a normal life.

In addition, suppressing cytokine production and raising anandamide levels in the bronchial fluid could keep asthmatic symptoms at bay.

Asthma Patients Have Reason to Hope With CBD

Asthma is a serious illness and complicates the lives of its sufferers. With millions of patients in the US alone, and tens of millions more worldwide, it is important to offer hope by finding new therapies that provide relief for everyone.

CBD is providing new hope for those who cannot adequately manage their asthma with medication or do not wish to because of the potential side effects.

Despite limited research, CBD’s therapeutic effects for the disease are promising, and previous studies prove CBD is a safer treatment than pharmaceutical medication. Additionally, the CIITECH/Hebrew University of Jerusalem study should encourage patients that the cannabinoid’s benefits for the disease may soon be solidified.

As further research is confirming, CBD is a promising therapy for asthma and will help many patients lead happier, healthier lives.

Have you or a loved one used CBD for asthma? What kind of results did you achieve? Share your story with us in the comments! 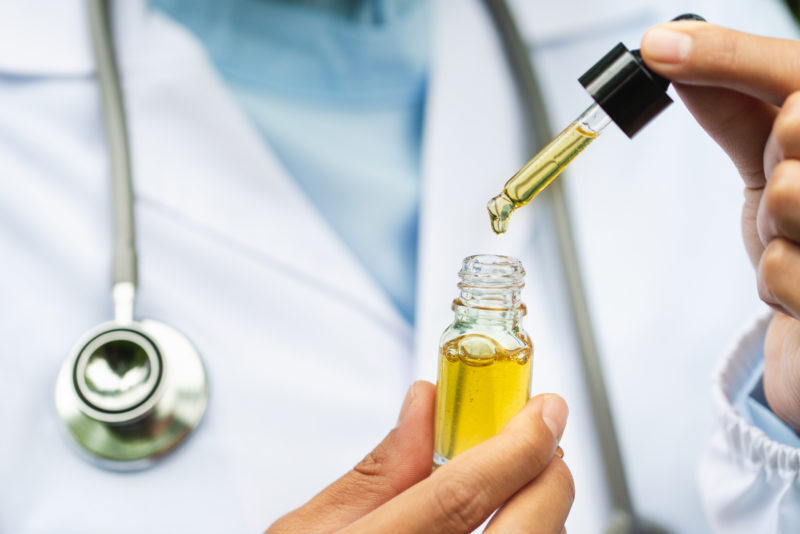 Does Cannabidiol Improve Quality of Life for Alzheimer’s Patients?